Create an Account - Increase your productivity, customize your experience, and engage in information you care about.

What Does the University City Fire Department Logo Signify? 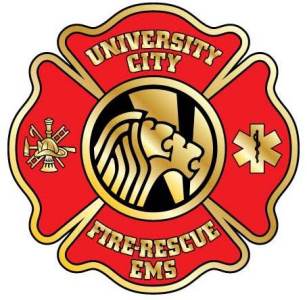 Fire Departments have emblems that are visible on their uniforms and apparatus which are a means of identifying the department, but also tells a story.  The University City Fire Department utilizes the common shape for a fire department, called a Maltese cross.  But why a Maltese cross you may ask?  Around 1100 AD, a new form of weaponry had been developed; glass containers filled with flammable liquid called naphtha.  These glass containers would be thrown at the opposing army in battle.  When the glass broke, the naphtha saturated the area.  A flaming torch would then be hurled, igniting the naphtha and whatever it had splashed on to.  Seeing their “brothers” in peril, other soldiers would come to their aid and extinguish the flames, saving their lives…and at the same time, placing themselves in harm’s way.  Those solders whom had come to the aid of others received a special award which resembled a cross.  Since these soldiers were from the island of Malta, that award became known as the Maltese cross.  The first “fire fighters” were born.

Why a red background?  The color red, as used in the fire service, dates back to the 1800’s when fire services were owned by insurance companies which would mark those homes who had paid for their service with a plaque above the front door.  These fire “companies” were run by brigades.  There was a lot of competition between fire brigades from neighboring cities and towns, and even between those within the same city.  Each brigade took great pride in their hand pumps.  Each brigade wanted their “rig” to stand out by being the cleanest, having the most brass, or being a regal color.  Since red was the most expensive color at that time, that’s the color most fire brigades chose to paint their equipment.

The fire "scramble" located on the left arm of the Maltese Cross is made up of the fire fighter “tools of the trade”… a helmet, a bugle (Officers used to use speaking trumpets, or bugles, to communicate orders to the fire crews, now we have radios), a nozzle (for controlling water), a pike pole (to reach high places and remove ceiling), and a pick head axe (used to chop through roofs).

The “Star of Life”, located on the right arm of the patch, is the symbol for emergency medicine.  Just as a Pharmacist has the mortar and pestle and Doctors have the caduceus, Emergency Medical Technicians-Paramedics have a symbol.  The six arms of the symbol represent the six functions of the EMS system.

The staff in the middle of the star represents Medicine and Healing.

Of course, the text at the top arm of the patch reveals who we are (University City), while the text on the bottom encompasses what we are capable of, mitigating fires, providing technical rescue, and providing EMS.

The center circle of our emblem represents a story, University City.  While we know the Lions are the City’s mascot, what are those strange “beams” of light on the black background?  Well, those “beams” represent the calling card of University City stemming back to its early days of inception…

In 1903, Edward Garner Lewis broke ground for the Magazine Building (now City Hall).  Mr. Lewis was the publisher of the Woman’s Farm Journal magazine at the time.  He decided to develop a “model City”.  At the very top of the 135 foot high Magazine Building, he had erected an eight ton light beacon.  This same beacon was utilized during the 1904 World’s Fair to draw attention to University City and everything it had to offer.

So, there you go, that’s the story the University City Fire Department emblem tells.